A natural alternative to IVF, without the side effects
After 4 years of trying to conceive, I had a total sum of 6 weeks treatment before falling pregnant

A breech baby is when their head is not facing downwards towards the opening of the cervix and the vaginal canal. There are three types of breech presentation, depending upon the baby’s position inside the womb:

Breech babies are quite common. Your midwife or obstetrician may offer you an external cephalic version (ECV). This is when an obstetrician tries to turn the baby into a head-down (cephalic) position by applying strong pressure on your abdomen. It is a safe procedure but can be very uncomfortable. You may be offered pain relief during this procedure. Around 50 per cent of breech babies can be turned using an ECV and will stay head-down, allowing you to have a normal vaginal birth.

The gentlest way of turning a breech baby is to use the traditional Chinese medicine method called moxibustion. Moxibustion is the application of heat-therapy into a specific acupuncture point on the body. Traditionally, moxibustion used the burning of a specific herb called Ai Ye (mugwort), which is placed around 2cm (1in) above an acupuncture point to pour heat into it. This method has been used in East Asia for thousands of years. I treat a lot of breech babies in my clinic. Rather than using the traditional herb Ai Ye, which produces a lot of smoke, I use smokeless moxa sticks instead, which are easier for patients to use at home and should not set off a fire alarm.

To turn a breech baby, moxibustion (heat) is applied to the acupuncture point Zhiyin (UB 67). This acupuncture point is located on the outer edge of the little toe, at the corner of the toenail (see image below). Applying a lit moxa stick pours heat into that acupuncture point causing heat to travel up along the urinary bladder meridian, the longest meridian in the body. The heat in the urinary bladder channel rises upwards and moves the baby thereby rectifying the breech position. It works in most cases, but not all. Sometimes there is not enough space for the baby to physically move or the baby does not want to move. The success rate of moxibustion being able to correct a breech position is around 72.5 per cent. 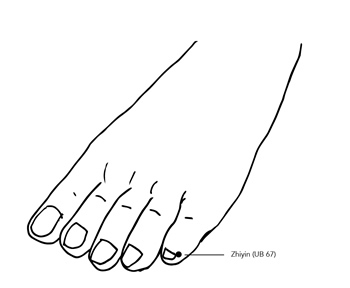 Instructions for moxibustion home use

How to apply moxibustion for breech babies

In-depth information about what happens during pregnancy and how to ensure a healthy baby. Buy now...